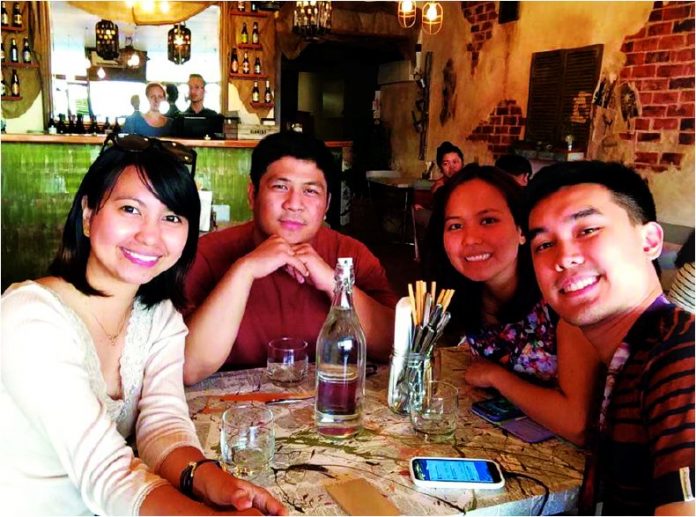 AUCKLAND – Every couple of months yet another ‘traditional’ Filipino cafe opens in Auckland; some even located cheek by jowl to their competitors. Is there room for yet another Filipino eatery in the city of the sails, you might ask? Some would say, why not, if the newcomer stands out from the rest.

‘Nanam’ is a ‘next-level’ Filipino restaurant offering a modern interpretation of Filipino traditional food. It opened its doors in March 2015 and publicity in the mainstream media has been drawing in the punters over the years.

The magazine notes that the flavours of Filipino cuisine have hitherto been ‘underexposed’ and were not easily accessible to Aucklanders; unless of course one was adventurous enough to venture into a Filipino community cafe.

Here’s a pat on the back from the prestigious Denizen magazine: “… for those who are up for something different and delicious we highly recommend you seek out this tucked away new gem whose flavoursome offerings are sure to leave you further enamoured with the virtues of Asian fare.”

But now there’s ‘Nanam Eatery’ – serving food that is not ‘traditional’ but rather Filipino inspired, that appeals to a wider market that includes both Pinoys and Kiwis.

They started their venture at a 4 meter by 4 meter space at the night markets of Auckland selling “Taco Pao” to see how consumers would react to their creations. It turned out to be a spectacular success as people were lining up to buy the buns.

This stall was their humble beginning towards exploring Filipino cuisine, and since then they have been serving both quality interpretations of classic Filipino dishes and daring new ventures into the uncharted territories of its cuisine.

The first outlet was a ‘hidden gem’ in a row of shop houses along Symonds Street in Royal Oak. James Ruiz-Thompson, a regular at this establishment portrayed the vibe as “very hip and contemporary” on his Facebook page.

They have now relocated to larger and exquisitely decorated space at 178 Hurstmere Rd, Takapuna, Auckland.

The pioneers behind this venture are a gutsy Filipino couple, Andrew Soriano and Jess Granada, who felt that the time was ripe to launch a good Filipino restaurant that has wider appeal.

“We are going along the path of a modern Filipino restaurant,” say Andrew and Jess, who own the restaurant. “We’re trying to retain the bold Filipino flavours and are making it exciting by using our knowledge of the food and techniques we have learnt along the way. As we are relatively young chefs we tend to be adventurous with food.”

There are 15 selections on the restaurant’s menu and it changes seasonally. “We want to serve the produce that’s in season, which keeps the quality fresh and the price affordable. (The chefs have refined their menu since our last visit).

It was fascinating to see ‘Sinigang Chicken’ on the menu. Sinigang is a popular soup in the Philippines. Here they marinate the sinigang flavours into the roast chicken and make a salsa using all the vegetables you usually find in the traditional dish, minus the soup.

Similarly their ‘adobo’ is quite different as they incorporate a lot of fresh ingredients available in New Zealand. Instead of pork and/or beef, lamb is used for the adobo.

The meat is braised with all the ingredients that normally go into an adobo dish. The potatoes are prepared separately from the lamb to create a chunky croquette. Even though they don’t add too much sauce you still get all the fundamental flavours of adobo.

My 10-year-old son, a picky eater, was attracted to the pink ‘Taco Pao’ that is pictured on the restaurant’s website. Basically, it is a deconstructed ‘Sio Pao’.

The diners get to create their own steamed buns by putting together the different ingredients from a selection of condiments, which can be quite fun.

Making this dish from scratch on site is what makes it so good, from the steam buns to the pulled pork humba, pickles and chicharon (pork crackling).

Sounds like a lot of work for the chefs. For Andrew Soriano it has been a labour of love; he has been perfecting this recipe over two years.

Other recommendations on the menu are a side-order of ‘palayan’ seafood rice to share and Jessabel’s personal favourite – ‘pinaputok’, fish with lentils and curry, cooked in banana leaves. This provincial dish from Batangas is a bit sweet and sour.

My wife enjoyed the ‘Relyeno’ or squid stuffed with ‘Vigan Longganisa’.

Another best-seller is the sizzling ‘Sisig’ chicken hearts.

As they say, no Filipino meal is complete without dessert. “Hands down the best halo-halo ever,” according to James Ruiz-Thompson. “They took a classic dessert and added a twist. The best.”

Naturally we had to try it and found out that it’s not just shavings of ice mixed with little components. Sous chef Ryan Soriano, (Andrew’s brother), has put in a lot of thought and effort into creating this special treat.

Last words from some of the diners. “Filipino food with class.” “Red Horse beer complimented the meal. Cheers.” And it was a top notch experience for me as well.